OperaVision celebrated World Opera Day with an exceptionally rich offer throughout October. This included live streams from two Royal Operas (Jenůfa from Covent Garden and Iolanta from Stockholm), a new Carmen from Tokyo, a World Opera Day Gala from Baku, a livestream from the World Expo in Dubai, Rosenkavalier from Garsington and an all-day young artist programme from seven partners on 25 October.

For this young artist focus on 25 October, we are very grateful to New National Theatre Tokyo, Opéra Comique, Royal Opera House, Staatsoper Hannover, Dutch National Opera, Polish National Opera, Teatro dell’Opera di Roma and Teatro Regio Parma for their contributions. The performances and documentaries they produced give a vivid picture of the care taken by opera studios in nurturing and stimulating young artists. Now that we have been introduced to these young artists, OperaVision audiences will be keen to follow their careers.

October was our most successful month this year with 397,949 views for the content on our main channel, which is above the year’s average monthly figure of 261,000 views. In October, our channel had 60% more views for full-length performances and 25% more for short-form content than the previous month. We gained an additional 2,400 subscribers to OperaVision’s YouTube channel. There was good continued growth on TikTok with 7,000 new followers who enjoyed varied videos shared widely by artists and institutions wishing their communities a ‘Happy World Opera Day’ in imaginative ways.

The most viewed #WorldOperaDay TikTok video was an extract of Offenbach’s Le Voyage dans la Lune by La Maîtrise Populaire de l’Opéra Comique which had 278,000 views. Taken from Opéra Comique’s young artist feature, this was an effective means to promote the WOD young artists documentaries on OV. Some young followers went as far as learning the choreography.

Dutch National Opera and Staatsoper Hannover responded to OperaVision’s invitation to take part in EC’s Young Artists’ Forum at the World Expo on 23 October. At this critical junction when our new project for OV is under assessment by the Creative Europe programme, we gave the EC Vice-President, Commissioner Schinas, also present in Dubai, a good sense of OperaVision’s role as a global platform for the next generation of talent. 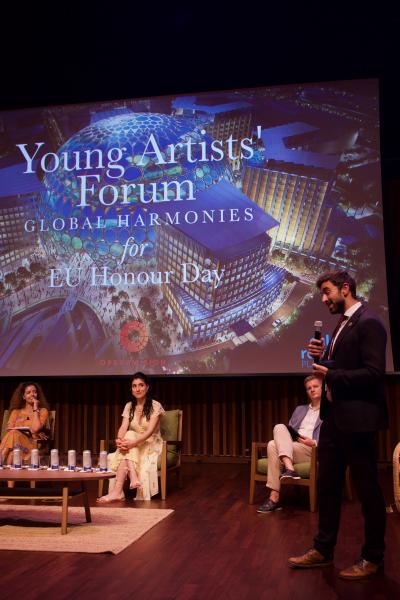