Our faithful member Lviv National Opera presents a charitable online project called TOGETHER WITH UKRAINE – A series of concerts, the purpose of which is to show the best examples of Ukrainian and world music and to raise funds to support Ukrainian people and culture and the Military Medical Clinical Center of the Western Region.

Lviv National Opera hosts artists from regions most damaged by the shelling during the Russian aggression in Ukraine. This presentation of Ukrainian works unites the best Ukrainian performers and ensembles from Mariupol, Kharkiv, Dnipro, Kyiv, Odesa, and other cities in Ukraine.

The project presentation and the first online broadcast will take place on May 6 at 19:00 CET.
Under the baton of the chief conductor Ivan Cherednichenko, whose parents were killed by the Russian army in Irpin in March 2022, Lviv National Opera Orchestra presents a great work of symphonic music, Symphony №3 by Borys Lyatoshynsky (1895-1968). The Ukrainian composer was persecuted by the Soviet authorities and censorship and suffered from slander and oppression, having to rewrite his works in order to meet severe censorship criteria. Symphony №3 will be broadcast in the first original edition of 1951. The orchestra also includes musicians from other regions of Ukraine who had to leave their homes.

The project aims at preserving the national musical heritage and its promotion in the world cultural space. War mustn’t destroy creative achievements, music should sound and suffuse people with energy and hope.

The project is implemented with the support of the Ministry of Culture of Ukraine. 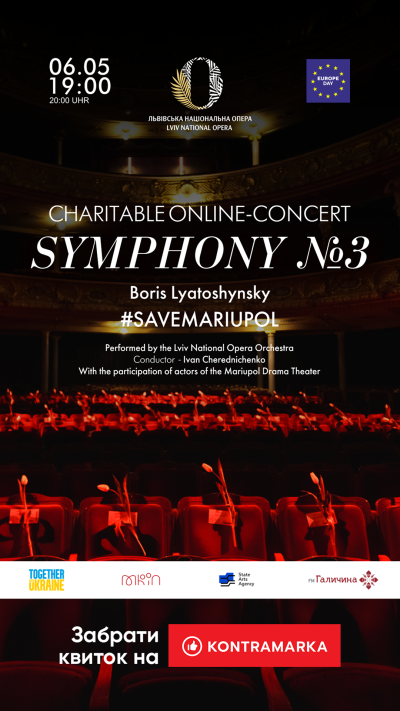