Taking its cue from the opera which reopened the renovated Teatro Donizetti on 19 November, Opera Europa’s autumn conference offered an Elixir of Life beyond the pandemic, with sessions devoted to leadership challenges and priorities, and conversations about the next generation of leaders and the lives of artists today. Omnipresent were the 21 young professionals recruited for this season’s reformatted Opera Management Course, who acted as rapporteurs for the four break-out sessions and, in groups of three, were given the task of summarising seven of the principal topics of the conference.

The force behind the invitation to Bergamo

The intense experience of this year’s Autumn Conference opened with the warm welcome of the institutions of the city of Bergamo, the perfect demonstration of how much opera and opera-related events mean in terms of prestige for a city.

We had the chance to re-live the difficult but hope-filled story of Bergamo during the pandemic. Francesco Micheli, Artistic Director of Fondazione Teatro Donizetti, confessed that when the pandemic was spreading and killing so many people, he felt like our work was almost irrelevant. Watching the pictures and the videos of the Bergamo tragedy maybe made us agree.

But Art allowed people to say goodbye to the dead during the commemoration event on 28 June 2020, particularly the moving performance of Donizetti’s Requiem.

Art also gave people hope in a difficult moment: the story of the reopening of Teatro Donizetti, the beautiful theatre we had the chance to work in during some of the sessions, after an 80 million euro renovation (put on ice by the pandemic), is like a metaphor for a long, and sometimes difficult, but also much-desired rebirth.

As Francesco pointed out, the theatre didn’t give up, because people asked the artistic community not to. The pandemic helped to spread opera all over the world (Donizetti Opera Tube reached 43 different countries) and people realised they needed Donizetti’s music. His life journey teaches all of us to hope and not to give up, especially to young people, still now, with projects dedicated to them such us Citofono Donizetti and Opera Wow.

At the end of the panel, and at the end of this beautiful, intense journey in Bergamo, we can say that maybe it’s true that what we do might not seem that relevant sometimes, but, as one of our mentors told us: ‘It’s true, we don’t save lives but at least we change them’.

■ We should work to help build a non-hierarchical relationship to our communities.

■ It is important to focus your efforts as opera can’t be everything to everyone.

■ The idea is to initiate change in our communities and let them change you by rethinking the relationship between virtuosity of technique and quality of expression.

■ By empowering audiences we give them room and amplify their voices.

The future of leadership in opera has been another focal point of conversation. After a huge crisis, a bold process of reform has been started at Badisches Staatstheater Karlsruhe. Through coaching and the installation of a round table with all departments, a new culture of open communication was established. Employees have started task force groups, to discuss and evaluate several burning issues, the future structural model being one of them. Re-imagining Hierarchies will be at the heart of our future efforts, to strengthen the artistic growth of the opera world.

The session had an Italian focus with Barbara Minghetti (Como) and Sebastian Schwarz (Torino) discussing some of the challenges they face. However, there were three main points that related to all European Opera Houses.

1. The importance of reprioritising the heart and soul of Opera: community focused theatre. One suggestion was to engage artistic companies to create community projects, telling stories about the people and contributing to the recognition of issues of diversity on stage.

2. The importance of having leaders with the competence to lead businesses; leaders who are not just focused on short-term success, but on the long-term well-being of an opera company.

3. The importance of giving artists a voice in our processes and programme across all spaces. Bringing artists on board with the community focus from the start will not only help the first point of making community a priority, but it will also help the artists feel a sense of ownership of the theatre.

Cultivating the Next Generation of leaders

A specific profile for a leader in the theatre field does not exist.

Everything starts from a great passion and builds slowly by modelling itself according to the person and the space that surrounds it.  A school, a mentor, a boss has to make the new leader to discover her/his own talent.

For the new generation that approach to the theatre field is good to have an active dialogue with the superiors in order to avoid mistakes, especially at the beginning of a career. First, a leader has to be able to listen and to understand what happens around. To have a look inside the institution she/he manages and get to know the pros and cons in that position, being able to admit mistakes sometimes.

Each institution is very different from each other, and this is the beauty of it.

Therefore, it is necessary to create a balance between critical thinking and listening in the leadership position.  Give trust to the employee and make sure that everyone can own her or his part in the goals of the theatre.

It’s a gallery of personalities: without them nothing will be possible. Ultimately, it is about the people and for the people!

Raehann Bryce-Davis took the stage not to sing but to raise her voice and present the Black Opera Alliance. The pandemic and the murder of George Floyd triggered the creation of this Alliance with the aim of empowering black people and challenging institutions to truly represent all members of society and make opera more inclusive. They created an action plan, the Pledge for Racial Equity and Systemic Change in Opera, which suggests improvements in the opera world, such as hiring black artists, giving them more visibility and place in the programmes, as well as training and hiring artists from diverse backgrounds and communities. It was highlighted that organisations need to foster new narratives by hiring librettists, composers and dramaturgs that can tell their own stories. Two other recommendations were made:

1. To expand our networks to reach the diverse talent that is waiting to be found
2. To grow the talent that we wish to see on and behind the stage by making opportunities accessible to everyone It was also pointed out that these changes cannot be carried out without new policies. Some of these actions can be applied to other realities and all of our institutions in Europe and the whole society will benefit from them.

The life of the Artist

Are artists efficiently prepared for the reality of the professional world today?

Can they still make a career with less and less stable ensembles? How may artists and institutions or companies help and learn from each other? Moderated by Karen Stone, the Life of the Artist panel raised awareness on how artists are struggling to survive and find their path in a more and more competitive professional world.

Precarity, lack of time for artistic development and limited access to performative spaces that enable artists to learn by doing were stated. In a time of competing individuals, Opera managers have to succeed in the challenge to build or maintain systems of collaborative work that solve these problems and raise awareness for Opera being a team sport. Opera managers have to take on nothing less than the challenge to provide an environment of open and inclusive spaces of love and admiration. Doing so, institutions and artists can reach their common goal of creating remarkable opera through cooperation, communication and, above all, respect for each other.

Instead of perceiving the climate change issue as a burden, we should see it as an opportunity for opera. Making theatres more eco-responsible is an enriching challenge for artistic creation; it will benefit the financial balance in the long term (e.g. reduced energy costs, recycled materials) and it should transform the hierarchical structures of opera houses into more sustainable models, where collaboration is the key.

Tools and frameworks are available to start the transformation. The Theatre Green Book and the OSCaR project (Opera Sceneries Circularity and Resource Efficiency) offer efficient and collective methods to implement eco-responsible solutions in theatres. The Eco-Perform project will propose trainings to increase sustainability knowledge and skills to a wide range of professionals of the performing arts sector.

Many initiatives already exist in opera houses. By extending them and joining forces to design mutualised solutions, opera companies will have a significant effect on environmental protection and make performing arts an example and a leader in eco-responsibility. 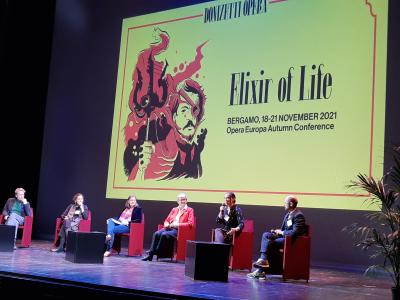 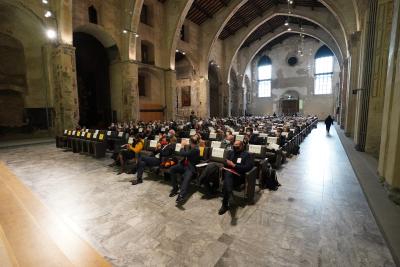