Integration and Inclusion in Budapest

Standing ovations can’t always be guaranteed at the opera, still less at conferences, but there was one at Opera Europa’s autumn conference in Budapest. It marked the formal announcement of Nicholas Payne’s retirement at the end of this year as the organisation’s director, a post he has filled with matchless diplomacy and aplomb since 2003. Bringing already considerable experience of leadership roles in several British opera companies, never the easiest jobs, he applied it to build Opera Europa into a thriving organisation that has fostered cooperation across all levels and departments at opera houses across Europe and beyond. He’ll be a hard act to follow, but the successor facing that challenge has been chosen and she was announced in Budapest as Karen Stone.

Presented under the banner of ‘Integration and Inclusion’, the conference made full use of the Hungarian State Opera’s splendid facilities. As the company’s general director Szilveszter Ókovács reminded us during his welcoming speech, Hungary has a population of just 15 million yet its capital is home to one of the world’s biggest opera companies. But as an example of the challenges many European theatres face this winter, the HSO has already closed its Erkel Theatre for a few months in order to save on exponentially rising energy bills. As Evica Taseska Karanfilova — representing one of Opera Europa’s newest members, the National Opera and Ballet of North Macedonia in Skopje — pointed out in the opening session, ‘You don’t dance with cold feet’.

Addressing some big, existential issues, the conference was thus nevertheless full of practical discussions. On the ‘Learning to like opera’ roundtable, Scottish Opera’s Jane Davidson — as befits her education and outreach brief, one of the conference’s most entertaining panellists — said that it ‘was really hard to make people like opera!’. Speaking for Estonian National Opera, Tuuli Potik found that it helped to work on the teachers first: by getting them to visit the opera house twice a year, they were no longer afraid of opera (nor of teaching it). Summing up at the end of the conference, Nicholas Payne recalled the late Graham Vick’s conviction that education is part of the whole opera experience.

But integration is not only about bringing new people in; it’s about looking after those already working in opera companies. Covent Garden’s HR manager Steven Foulston spoke about professional development and highlighted the competition presented by the commercial sector. Who knew that there are more film studios in Hertfordshire (the county just north of London) than Hollywood? ‘If you can’t compete on money,’ he said, ‘be the best employer.’ Leyla Ercan talked about breaking down barriers in Hannover and focused on forms of exclusion that are still too often felt. As she said, there’s a difference between being international and being diverse.

‘Diverse programming’ was the last – though certainly not least – of the conference’s eight panel discussions. Inclusion is a strand of the Next Stage initiative, led by Opera Europa and FEDORA. The first, almost inevitably given the perilous state of the world, was ‘Culture and politics’. Much of this focused on very current challenges, but Karlsruhe’s Florian Köfler raised the spectre of right-wingers taking an interest in the arts in the future, warning that if they win power they will install not just their own culture ministers but Intendants too.

Perhaps the most stirring and inspiring contributions came from the strong Ukrainian presence at the conference. Oksana Taranenko, who recently directed the premiere at Odesa Opera of Oleksandr Rodin’s Kateryna, said that, ‘With Russia trying to erase Ukraine’s national identity, the fight to preserve, and build upon, Ukraine’s artistic heritage has taken on new urgency.’ Opera has a significant role to play in this, and the country’s deputy culture minister Galina Grygorenko spoke about how cultural life was continuing despite a lack of security, and still making use of the freedom of expression the country gained only 30 years ago.

Chairing the ‘Culture and politics’ panel, the National Theatre Brno’s general director Martin Glaser posed the question, ‘Should opera be political?’, to which Grygorenko asserted that it is the mission of theatre to reflect what’s going on around it. Proving rather dramatically that opera is a political art form, the livestreaming of this discussion reverberated back home for one of the participants, who suffered repercussions the very next day: Matej Drlička, general manager of the Slovak National Theatre in Bratislava, was forced to resign. A petition to have him reinstated was instigated, but the episode is a reminder that free speech cannot be taken for granted even in opera circles. As the conference proved, opera is indeed a political art form, but it is also one that continues to bring people together. 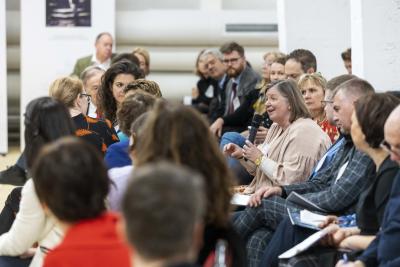 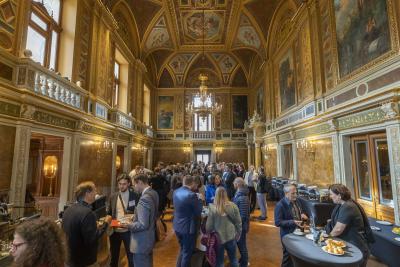 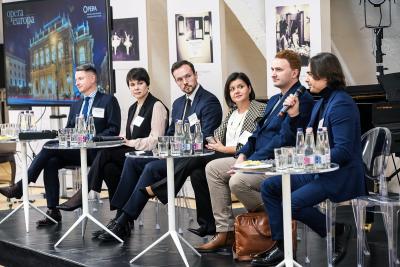 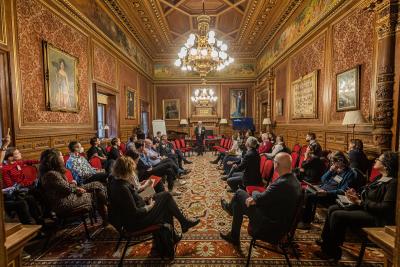 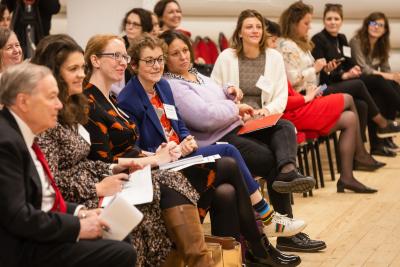